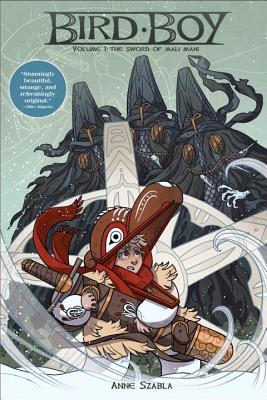 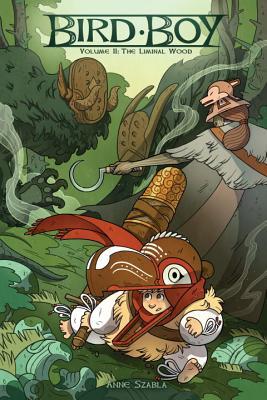 **Description at the bottom**

“Bird Boy follows the story of Bali, a 10 year old Nuru boy, who is desperate to prove his worth to his tribe, despite his small stature. Banned from the ceremony that would make him an adult in the eyes of his people, he takes matters into his own hands. In an attempt to bring proof to his tribe that he is capable of taking care of himself, he stumbles upon a legendary weapon, and must end up fleeing across a dangerous land of gods, men and beasts to keep it from falling into the wrong hands…”

I know it’s been a bit and I fell off my schedule boat a long time ago, but I’m still kicking!

I decided to continue going back to the old comics that I keep up with and thought the Bird Boy series would be another good one to introduce to you all.

Bird Boy is a webcomic written by Anne Szabla with currently 203 pages free to read at http://bird-boy.com/, but Dark Horse Books has published the first 160 pages into two volumes, Bird Boy: The Sword of Mali Mani and Bird Boy: The Liminal Wood, if you’d like to read the story of Bali in physical form.

Szabla’s story of Bali is an endearing one and one that I’m sure every kid can relate to and every adult can remember feeling at some point in their lives as he seeks to prove his worth to others. The first volume introduces readers to an unnamed world in which the story of our hero takes place and sets in motion the trouble that Bali gets himself into. This world has been set with hardship as the tribes that live along it’s main rivers struggle to provide for themselves and avoid the clutches of a mysterious group of individuals known as the Rook Men, who have been cursed to live in a forest that’s central in the land by a great warrior long ago. Asides from the Rook Men, bizarre and dangerous beasts dwell posing an additional threat to the peoples. However, things have not always been that way and it seems they may change. Szabla carefully overlays the world’s lore with the events that Bali is experiencing in such a way that readers are not left guessing or feeling overwhelmed by the setting and keys the readers in with some foreshadowing. Even with this overlay, the text is not dense and easy to follow along without having one’s eyes feel sore. Szabla has a playful artstyle and uses a simple yet wonderful color palette that I feel can be appreciated even more with the minimal use of text. The second volume provides some more knowledge of the world and a new member joins Bali’s party as he seeks to leave the forest he has wandered so deeply into. Bali even encounters what appears to be the friendliest monsters thus far and that says something as he has been chased and intimidated by almost all of them thus far. Both volumes are a relatively quick read and in rereading them, I think it only took me two to three hours.

From what is currently available, Bird Boy seems to be a story of determination and finding self-worth set in a dangerous, but beautiful world. The first two volumes were published a few years and the third volume is still in the works. The most recent page for the third volumes was posted back in 2017 with little update since then. I don’t keep up with Twitter (though I have been encouraged by multiple parties to do so), but I know Szabla has posted there about the progress of the series and that they will come back to it, however something had come up regarding its production. While the story building is necessary to understand a world totally different from others, it does make the build up in each volume a little slower and with no outlook on future volumes it can certainly be difficult to keep up with such a series. With what is presented thus far, I would Bird Boy  4 out of 5 stars for the slower story development. I would still highly recommend it! It just might be a little disappointing to not have more of it at this time.

Again, you can certainly read through its entirety online and maybe with the online support, we might get some more physical content from Szabla on it!

Have you guys had similar encounters with cliffhangers for series? Do any of you keep up with webcomics?

Partial Nudity: Characters may be seen in undergarments at certain points

Smoking: Characters may use or describe products for smoking purposes which may or may not be fictional

Violence: Characters may experience or use physical violence from or against others. This may be through melee combat or with weapons.

Death: Depictions of characters causing death or experiencing it. Death may result from violence, or other events.