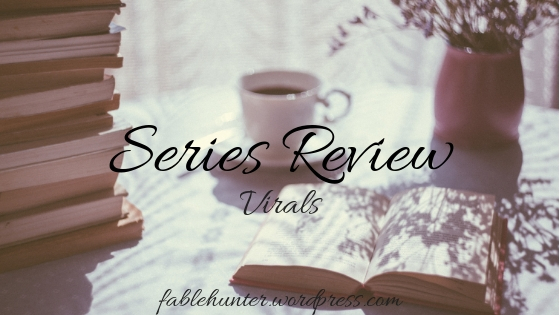 Happy January everyone! This is my first post of the new year and I’m so excited!!! What better way to kick off 2019 than with a giant review on one of my favorite book series, Virals! This series is by Kathy Reichs, author of the famous Bones book series (and TV show), and her son Brendan Reichs, author of Nemesis.

I decided to do a general review of the series as a whole because I *accidentally* read these books back to back. After finishing the series, I took to Twitter and did a poll asking if people would prefer I review each of the books on their own, or a review of the entire series. Most people voted for the latter, so here we are! I’ve never done this style of review before, so if this seems more like I’m just hard-core screaming and fangirling rather than reviewing, you have my apologies (but to be honest that was pretty much what I was doing the entire time I was reading these amazing books).

Don’t have time to read the entire review? That’s okay! Theres a quick summary with my rating at the bottom of this post!

I’ve read most of the Virals series before, but a little while ago I realized that I never finished the series! If I remember correctly, I only got to the third book, as that was all that was available at the time. It had been years since I last picked it up, so I decided to reread the entire series and see if it was as great as I remember. And surprisingly…

IT WAS SO MUCH BETTER THAN WHAT I REMEMBERED!!!!

I don’t think I’ve ever read a five book series as quickly as what I read these. I literally couldn’t put any of the books down. Every time I tried to, it was almost painful and I couldn’t stop thinking about it and wondering what would happen next. The words addicting, exhilarating and captivating are perfect to describe the entire series.

The main character of the series is a young girl named Victoria (Tory) Brennan, and her three best friends Hiram (Hi) Stolowitski, Shelton Devers, and Benjamin (Ben) Blue. Tory recently moved to Morris Island in South Carolina after her mom died in a tragic car accident, causing Tory to discover and move in with her long lost father, Kit Howard. Kit is a marine biologist at Loggerhead Island Research Institution, nicknamed LIRI. Tory meets the other three teenagers living on Morris Island, whose parents also work at LIRI, and they quickly become best friends.

The four of them often go to LIRI and enjoy spending time on the island. The island is full of wildlife, from monkeys to a wolf-dog pack that Tory is fond of. One afternoon at Loggerhead, after running into an upset group of monkeys, Tory found an indecipherable dog tag and quickly becomes determined to find out who it belongs to. This lets loose a chain of events that not only puts them in the middle of a cold-case murder investigation, but also changes them down to their very DNA. A sci-fi twist on werwolves, the group develops enhanced primal abilities after being contaminated by an experimental strain of Parvo. Science nerds turned crime investigating pack, Virals starts off with a bang. The next four books that follow involve more mysteries, more action and a lot of group drama as they try to figure out exactly how they changed and what it means for their futures.

“An elite confederacy of nerds. My peeps”
― Kathy Reichs

Each character has such a unique personality and is talented in their own ways. Tory is intensely intelligent, having skipped a grade and ending up in high school at 14, and taking all the AP classes to boot. As you can probably guess, this doesn’t make her very popular amongst her preppy peers. But her mind is as quick as a whip and she loves anything science related, her knowledge of which is frequently useful. She eventually becomes the unofficial leader/alpha of the group due to her unique abilities, intelligence and determination. She doesn’t back down from a challenge, even if it might involve a little harmless B & E every once in a while (..or like, every few chapters. In every book). She’s fierce, determined and brilliant. She’s such a strong and amazing female heroine, and I absolutely adore her.

“Who’s going to rob us? A crackhead crab? A jellyfish junkie?”
― Kathy Reichs

Hi is by far the quirkiest of the group. He’s not athletically inclined, but his mouth likes to run often, earning him both chuckles and slaps in the back of the head. He’s a great comedic relief, providing entertaining remarks and sarcastic repertoire. He is a master of sarcasm, and usually provides on demand distractions. He also has a flare for fashion, going out of his way to go against the norm. He enjoys  a good floral shirt on his casual days, and an inside out jacket at while at school. He has a passion for technology, and ends up the history guru and technological expert of the group. His banter and remarks have made me truly laugh out loud, which is an accomplishment of any book let alone a series of books.

“You’ll start talking, and pretty soon we’ll all start nodding, and then the next thing you know, I’m hang gliding off the Eiffel tower at night, being chased by ninja vampires.”
― Kathy Reichs

Shelton is the computer expert of the group. He is easily nervous and a critical thinker, usually the first to object to Tory’s plans. His computer skills makes him an adequate hacker and efficient researcher. He also has an interest in lock-picking, a skill he gets to practice more than he ever expected. I would say he is the most pessimistic and anxious, often needing coaxing from the rest of the group in more of their adventurous (and sometimes less than legal) schemes. The only times his confidence really shows through is when he jumps onto a computer or solves a puzzle.

“Im studying jerkoffs in the wild,” Ben answered dryly. “This seemed like a good chance to view one up close.”

Ben Blue is broody and temperamental, but also incredibly loyal and protective of his friends. He is described as quiet and serious, his sentences short and to the point. The most he seems to speak are to his friends. Otherwise, you can expect monosyllabic responses or scathing remarks from Ben. He can be the most prideful of the group, as well as the easiest to anger, butting heads with just about everyone. However, he is the most supportive of Tory and her schemes, which almost always sways the other two, who are usually a little more dubious. He is the oldest member, and has a boat named Sewee, making him the groups main mode of transportation.

“God help anyone who messes with the Virals!”
― Kathy Reichs

Each book had a unique plot full of danger and mystery, full of twists and turns at every corner. Whether it be a cold case murder, treasure hunting, or kidnapping, each book was suspenseful. Though the plot was intriguing in all of the books, I loved the character interactions the most. It was fantastic seeing the group grow and change through the series. Their connection as a pack only grew stronger, both through their bond as Virals and by the dangerous situations they traipsed into. The drama would sometimes cause rifts, but they always came back together again, usually stronger than before.

I could write an entire book filled with praises for this series, breaking down every character and event, it was THAT GOOD. Sadly, I think it would be more fun for me to write than for others to read, so I shall wrap this up before I get too carried away.

The books are filled with diverse characters, funny conversations, and thrilling action. I would describe the entire series as: suspenseful, addicting, hilarious, exhilarating, and captivating.  It takes on a unique perspective of werewolves and mystery, which turned out to be a fantastic combination. Though I loved all four characters, I loved Tory and Ben the best through the entire series (though there was one book I became irritated with Ben and his decisions, but I digress). My favorite books of the series would be a tie between Seizure and Exposure, though all were great. The ending was so satisfying, though I will say I was literally screaming at the last sentences of Terminal, the final book of the series (I DEMAND A SIXTH BOOK GIVING AN EXPLANATION).

I originally wanted to also do a mini review of each book in this post, however I ended up writing way more than I meant (whoops). If you would like me to write another post with mini reviews or full reviews of each book, please leave a comment down below letting me know!

Have you read Virals? What did you think? Did you love it as much as I did? What was your favorite book of the series?
Good Hunting!!!